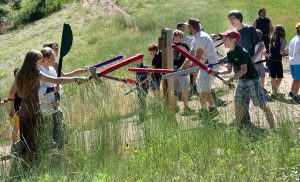 Custom events that engage, inspire, and challenge a band of warriors, with different options based upon group size, age, and event length.

Capture the flag with foam swords! (Actually, it’s so much more.) Depending upon the number of participants in the class/event, skirmishers take part in a variety of exciting scenarios that develop fitness, teamwork, planning, quick thinking, and problem solving. Sword Skirmish activities may include tournament games, structured free-for-all sports, semi-competitive “adventure rallies,” or storyline-driven adventures, all of which make use of our “Swashers” – safe foam sword sports equipment. For more information about each particular type of skirmish activities, see below. To set up a Sword Skirmish event, please use our Birthday/Event Booking Inquiry Form.

Sword Skirmishes can be integrated into already existing programs and events, both for kids and adults. For schools interested in hosting an after-school program with Renaissance Adventures, or for schools that allow us to do marketing at school-wide events, we may be able to offer a free Sword Skirmish event. Please contact us for details.

Capture the flag with foam swords! (Actually, it’s so much more.)  We play popular games such as Revenge, Shapeshifter, Dwarves vs Goblins, and more.

Skirmishers are divided into small , semi-competitive teams to overcome a series of challenges that require teamwork, planning, fast thinking, and plenty of dueling.

Duel against your friends or the red knight! This drop-in sword dueling booth can be structured as a free-for-all or tournament.

Band together to undergo a mission to save the kingdom! Participants use powers and cooperate to overcome exciting challenges.

Decipher Clues to Discover the Treasure! 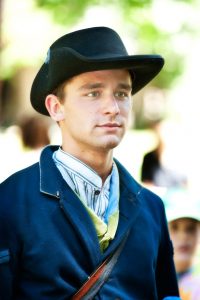 Sword Skirmish Club can be hosted by a library, school, recreation center, or other venue. This venue chooses the date (usually a weekend day), time, and theme of the skirmish. Often, they choose a theme that is related to a popular book or movie, such as Hunger Games, Lord of the Rings, or Star Wars. We take that theme and make it into an active outdoor skirmish using foam swords, challenging game mechanics, and a lot of fun!

I’ve been with the High Plains Library District for over ten years, and that time has given me a pretty good eye for performers and programmers. Renaissance Adventures was more than impressive. Aaron was easy to schedule, he came on time, he was prepared, and the entire thing was wrapped up without a hitch. It was about as close to turnkey as programming gets, if that’s what you’re looking for.

That’s the business side of things. Renaissance Adventures has it together.

What you’ll find with Renaissance Adventures, however, goes way beyond professionalism.

When Aaron arrived, he opened things up and chatted with the teens as they filtered in. He took genuine interest, and in no time flat he’d created a safe, fun environment where teenagers were comfortable swashbuckling. That’s no small feat. Throw an average programmer in a room full of teens and the results aren’t always going to be pretty. But Aaron knew what he was doing, he was comfortable, and through friendly talk and some joking around, he sent the immediate message that it was okay to play.

I also saw a program that brought in the perfect level of physical activity. Our teens had a miniature adventure, a quest of sorts, and they didn’t just watch it happen or press buttons on a controller. They held swords (safe, sword-like objects, that is) in their own hands, and they engaged in something that kept them captivated. They got to do something physical, but at no time were they endangered or did I feel like our library was imperiled. It really was the perfect balance.

I’m hoping to book Renaissance Adventures again this summer, and I’m hoping to book them for a longer program. Aaron described some of their offerings to me, and they sounded like excellent experiences. There’s learning, physical activity, a dash of nerdiness, and most of all, a TON of fun.

Do it. Stop reading this and book Renaissance Adventures.